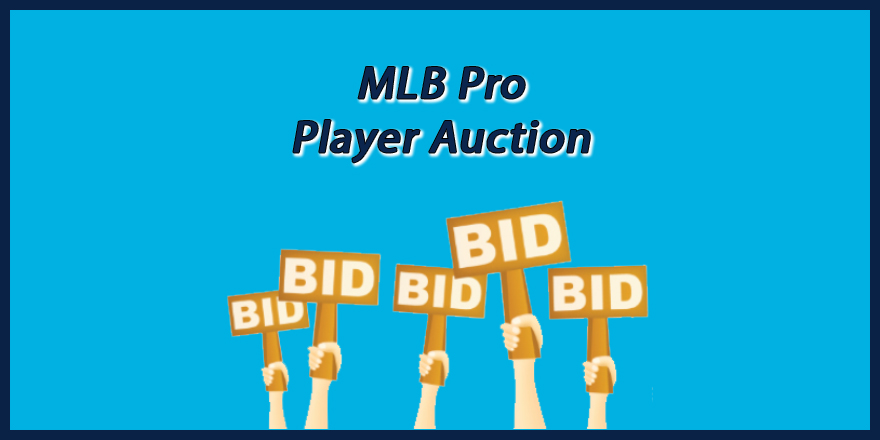 On behalf of the Commissioner’s Office, MLB Pro would like to announce a player auction to take place during the upcoming Winter Meetings.

The auction is a way for teams to make some quick cash on players they don’t really want anymore, or teams to add some interesting depth pieces with only cash.

Here’s how it works:

Anyone seeking to sell some players will submit a list (to Matt via Slack PM) by 10 AM PST on Sunday, January 5. The League Office will compile and distribute a list of players up for auction later that day or on Monday. Each time may submit NO MORE THAN five players, recent Rule 5 selections are not eligible.
[Once a player is submitted to the auction list, they may not be traded in any trade prior to the auction.]

Make sure you list your players from high priority to low priority; if your list is too long or we get too many submissions, the auctioneer will not post the players for auction towards the bottom of the list at their discretion. So make sure you have the players you most want to sell listed first.

1. SP Scott Baker (AAA), starting bid $100k
Scott is an excellent control pitcher who has enough stamina to be an effective back-of-the-rotation starter.

3. OF Bryan Petersen (AAA), starting bid $500k
Petersen is above average at just about everything he does and is still a relatively cheap fourth outfielder.

The player auction will be spread out over the duration of the Winter Meetings. The tentative schedule is as follows:

The night of the auction, all participants will gather in the MLB Pro Slack. If you are unable to attend the auction, you may submit bids ahead of time to Matt who will use them on your behalf. The auctioneer will then post the first player and solicit bids. Bids must be at minimum in increments of $50k.