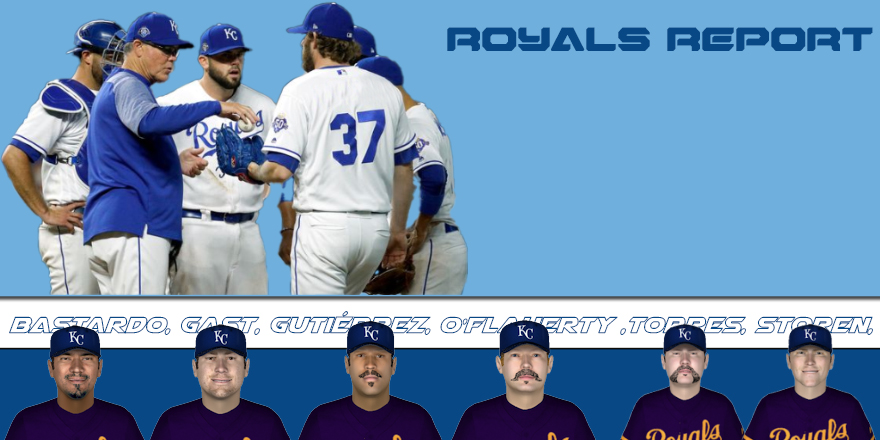 Kansas City, MO – While the Kansas City starting rotation is full of question marks, the bullpen is mostly set as we enter Spring. The biggest addition to the pen for 2020 comes from the 2019 starting rotation. After putting up good numbers in the Kansas City bullpen in 2018, Jesús Torres transitioned into the starting rotation during the 2019 season. His ERA ballooned from 3.51 to 5.40, and he won just 4 games in 27 starts, so at the insistence of new pitching coach Jim Brower, Torres will return to the pen for the 2020 season. As incentive, Brower has promised Torres the closer role.

The setup men will most likely be LHP Eric O’Flaherty and RHP Drew Storen.  Reliable 34-year-old veteran Eric O’Flaherty is the oldest player in the KC bullpen. O’Flaherty was 2-4 with 7 saves and a 4.24 ERA in 66 appearances between Colorado and Kansas City last season. While his ERA was a bit higher than his career mark (3.64), he had a better WHIP (1.20) than usual, so he was just the victim of some bad luck. O’Flaherty was one of four players brought over from Colorado in the Trevor Story trade last July. Drew Storen, the highest paid player in the bullpen at $5.8 million, relished the change of scenery when he came to KC last season.  He has a 9.20 ERA and a 2.32 WHIP in 18 appearances for the Boston Red Sox when he was dealt to the Royals along with 3 others in the Jack MacNeill trade.  In 28 appearances with KC, he posted a 3.72 ERA and a nice 0.91 WHIP.

The Royals have added just one free agent to the bullpen, and he was on the team last season. After being released but the Miami Marlins in June of 2019, Antonio Bastardo signed a 1-year, 1.5 million contract to join the Royals on July 18th. Used primarily as a lefty-specialist, Bastardo was mostly effective at getting outs when needed. He posted a 2-2 record and a 4.41 ERA between Miami and Kansas City, and fanned 43 batters in just 32 innings of work.  The Royals tried to extend his contract, but the teams could not come to terms. After not finding any better offers on the free agent market, Bastardo finally accepted KC’s $1.6 million, 1-year offer and came back to Kansas City. Bastardo has a 21-17 record with 7 saves and a 3.24 ERA in 10 big-league seasons and has fanned 461 batters in 389 innings.

In middle relief, RHP John Gant and LHP Augusto Gutierrez are near locks to make the 26-man roster. Gant had a big year last year, going 3-3 with a 3.59 ERA in 57 appearances (105 innings) for the Royals. He’s not flashy; he throws an above average fastball and a below average change. But he always was able to stop the bleeding when called on. Gutierrez, picked up on waivers from Boston last month, has pitched well in the minors and during a cup of coffee with the Red Sox.  While he’s appeared in just 6 big-league games, he allowed just one solo HR in 16+ innings of work. Scouts think he will be a lot like Gant, only he throws more pitches and has less endurance.

That leaves a battle between Paul Weaver, Ian Kendall, Chad James, Ted Oppenhof, Matt Lang and Rob Heppell for the final spot in the pen.  Chad James, who was claimed off waivers from the White Sox looks to be the favorite here.  He was 9-6 with 11 saves in 47 appearances including 13 starts for AAA Tacoma last season.  His rights have been on the move a lot in the last 12 months, going from Tampa to the LA Dodgers to Seattle to Chicago to Kansas City. He has appeared in 16 big league games in his career, posting a 1-0 record with 1 save and an ERA of 3.00.

Next week, we’ll look at the competition for starting jobs and roster spots in the infield.