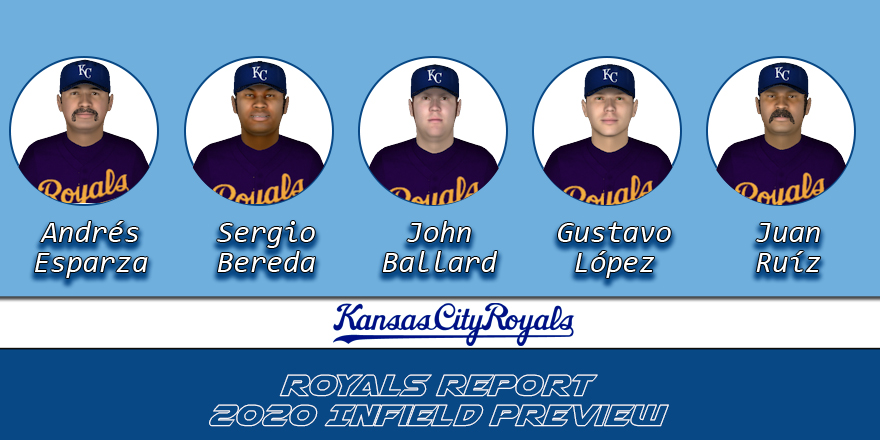 Kansas City, MO – There has been a lot of turnover in the Kansas City infield, with John Ballard the lone returning full time starter and Juan Ruíz expected to play a larger role. Ballard, at $3.6 million, is now the highest-paid infielder for the Royals (technically KC is paying Ryan Wheeler more, but since he’s on the Mariners now, we won’t count him). Much of the turnover is in line with the front office’s plan to become a better defensive club with more speed, fewer strikeouts, and a higher on-base percentage. Here’s a look at how much has changed since the start of 2019, with best guesses of who will be the starters this coming season:

Catcher is unquestionable the deepest position in the Royals infield. KC boast five players capable of playing at the big-league level. 30-year-old Rob Brantly and 28-year-old Frank Burt are the incumbents, with Brantly having started 51 games and Burt 41 in KC last season. Brantly hit .272-6-20 with 7 doubles and was clearly the better catcher from a defensive standpoint. Burt struggled to a .180 mark, but hit .251-11-53 if you include the 69 starts he made in Boston before being traded to Kansas City in the six-player deal that sent Jack MacNeill to the Red Sox.

Speaking of the Red Sox, on December 30th, the Royals made their first move to boost the catching situation by claiming 29-year-old Andres Esparza off waiver from Boston. Esparza split the 2019 season between Pawtucket and Boston, putting up a .345 average in 40 AAA games and a .259 average in 24 games with the Sox. KC scouts see him as a real cerebral catcher, and a guy with potential to hit for both average and power. The biggest downside to Esparza is his defense, where he looks like a pretty average player. Still, he’s currently the favorite to win the starting job.

To counter Esparza’s defensive shortcomings, on January 8th, the Royals inked 33-year-old veteran Alex Avila to a minor league contract. Avila is a plus-plus defender with two gold gloves (2012, 2014), but is lacking in the offense department. Avila was out of baseball during the 2019 season, but most recently with the Toronto Blue Jays. Avila is popular with both fans and players, and for an MLC seems like a pretty safe pick up.

The club’s youngest option, 27-year-old Blake Swihart, came to the Royals on January 19th as part of the trade that sent 3B Ryan Wheeler to the Seattle Mariners. Swihart had a busy offseason; after spending six seasons in with the Dodgers he was traded to the Toronto Blue Jays on December 2nd as part of a five-player deal. He was claimed off waivers by the Mariners on January 4th, just a couple of weeks before being traded to KC. Scouts see Swihart as a well-rounded catcher. He’s better defensively than most of our other options and better with the bat than Avila.

Although it’s easy to find guys who can hit and play first base, this is one of the organization’s weaker positions. But Royals management has decided not to throw any money at the position right now and will instead ride with what they have and upgrade later. The Royals bring back powerful Mark Trumbo, 34, who was signed July 17th and later renewed for another season in Kansas City.  Trumbo hit just 9 HR in 52 starts for the Royals but is clearly the team’s best pure power hitter.  He also fields quite well.  However, he failed to hit above the Mendoza line last season, so KC brass was looking for at least one other option at 1B this season.

Enter former Washington and Toronto 1B Sergio Bereda, 27.  Bereda has hit .287 in 179 career Major League Baseball games and should provide the Royals with a reliable bat.  Bereda came to KC along with prospects Camm Martin (P) and Jeffrey Sherman (OF) on November 30th in the deal that sent Drew Childs and Raúl León to Toronto.  Bereda immediately looked to challenge Trumbo for the starting job at 1B, and after scouts upgraded what they thought of his power hitting in January, he became the clear favorite.

Alongside a revamped starting rotation, this is where the Royals will be most drastically changed. 29-year-old second baseman John Ballard (.286-6-53, 58/54 BB/K in 147 games) was really the only player in last year’s original starting lineup that resembled the type of athlete the franchise is looking to build around. Ballard has some holes in his game; he has just average speed and range, he does not hit home runs, he does not lay down pretty bunts.  But he is an intelligent player that has good instincts on the basepaths, and he is tough to strike out.  Look for Ballard to start and bat first or second in the lineup come Opening Day.

28-year-old Juan Ruiz (.254-6-37 in 132 MLB games with Baltimore, Colorado and KC) is nearly a clone of Ballard.  He’s another intelligent hitter that’s tough to strike out, but he’s slightly better in the field and slightly worse on the basepaths than Ballard.  Ruiz came over from Colorado July 6th along with three other players in the Trevor Story trade.  He started the final 66 games of the season at Shortstop but is currently projected to be the starting Third Baseman.

Taking over at Shortstop will most likely be 22-year-old rookie Gustavo Lopez. Lopez was acquired on the same day as Ruiz in a separate deal with the Colorado Rockies.  Lopez was one of four prospects shipped to Kansas City in exchange for closer Nick McCully. He hit .336-10-46 in 60 games with AAA Omaha and quickly became one of the most talked about prospects in the Royals system.  Lopez has a fantastic glove and quick hands and is the fastest player on the Royals. He does not take many walks but is quick with the bat and should develop great gap power. Young, fast, hard to fan, and good at making contact, he is exactly the type of player the Royals are looking for.

25-year-old Júlio Soto was acquired from the Dodgers for C Jake Jefferies on May 24th. A three-time minor-league All-Star, Soto is looking to make a better impression in KC than he made last season. Soto hit .268-8-37 in 64 games in Omaha but hit just .132 in 17 games with the Royals last September. He can play anywhere in the infield capably but is best suited for 2B or 3B. He should be able to hit for average and with power, but he does not draw many walks and strikes out too often.

The Royals signed versatile infielder Luis Sardinas, 26, to a minor league contract.  He’ll try to make the squad this spring. He can play defense and run the bases well, but his play at the plate is a little lacking. He has only played in three games above AA in his career, but AAA Omaha is the worst-case scenario for him in this organization.

Free agent Marwin Gonzalez, 30, could have more of an impact than Sardinas. Gonzalez has over 500 games of big-league experience under his belt and has a career .252 average. He can play anywhere except catcher and should be a decent backup. He was signed to a minor league contract so there’s no real risk, but KC’s scouts seem to like Gonzalez a lot. He’ll get some playing time in spring training to see what he can do.

Hard working Logan Watkins, 30, was brought in on a minor league contract for depth as well. He appeared in 11 games for the Braves last season, going 1 for 11.  He ranks somewhere between Sardinas and Gonzalez in the eyes of our scouts, as a good fielder that can hit a little though he’s the best of the three when running the bases.

The final player in the mix for a spot on the bench is former Padre Pedro Ramírez. Ramírez was signed to an MLC this offseason as well, after hitting .275-4-42 for AAA El Paso. Ramírez is almost indistinguishable from Watkins, aside from being a year younger.

Next week we’ll wrap up our series previewing the Royals with a look at the outfielders.